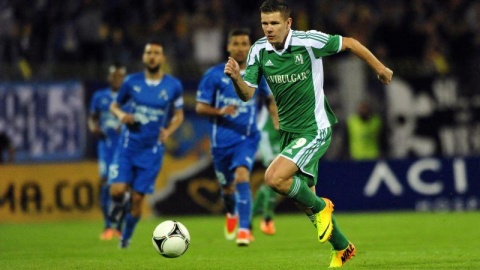 Roman Bezjak became a leading player for Ludogorets' success in the Europa League. Photo by agrupa.news7.bg

West Brom, who are currently 14th in the Premier League, desperately need a forward, and their eyes seem to be set on the 24-year-old Slovenian Bezjak, according to Soccer Magazine.

Bezjak made his name over the past fall, scoring 10 goals in 17 matches for Ludogorets in the Bulgarian league, as well as 4 goals in 5 Europa League matches. His 3 goals in the games against Dutch giants PSV Eindhoven undoubtedly put him in the spotlight of European transfer agents.

One of the obstacles for the transfer may be West Brom's wish to sign Bezjak on loan until the summer, while Ludogorets would like to sell him immediately or keep him. The owner of the champions, Kiril Domuschiev has placed a EUR 5 M price tag on the player.

It is reported that German team Werder Bremen are also keeping an eye on the striker.