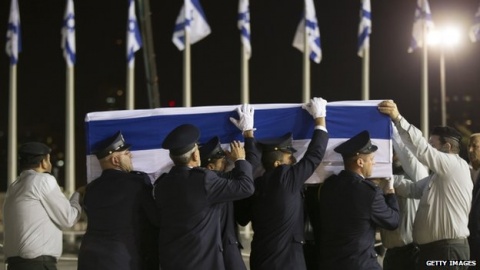 Sharon's body was brought to the Knesset (the Israeli parliament) on Sunday morning and his coffin was then placed on a podium in the plaza outside the building, where it lay in state throughout the day. Photo by Getty Images

A state memorial service and military funeral are set to take place amid heavy security in Israel for ex-PM Ariel Sharon, who died in hospital on Saturday after eight years in a coma.

The memorial will be held at the Knesset in Jerusalem and the burial at the family ranch in the Negev desert.

US Vice-President Joe Biden will be among 20 foreign delegates attending.

Thousands of mourners paid their final respects on Sunday when Sharon's coffin lay in state outside parliament.

Prime Minister Benjamin Netanyahu told a cabinet meeting that Ariel Sharon was "first and foremost a warrior and a commander, among the Jewish people's greatest generals in the current era and throughout its history".

Sharon's active role in four wars, from Israel's independence in 1948 until 1973, and later in government as the man who ordered the 1982 invasion of Lebanon, meant he was also widely loathed across the Arab world.

Palestinians saw him as a war criminal, because of the 1982 massacre by Christian Phalangist militia at the Sabra and Shatila refugee camps. An Israeli inquiry found him responsible for failing to prevent the killings.

But months before the stroke that left him in a coma in January 2006, he guided Israelis through a unilateral withdrawal from the Gaza Strip, with the declared aim of easing tensions with the Palestinians.