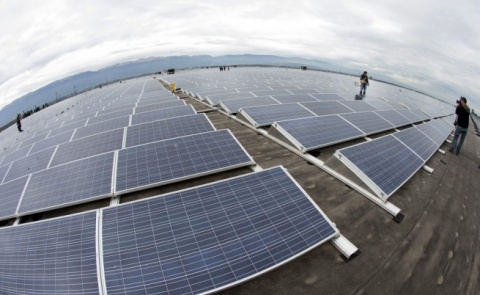 Members of the governing body of the Bulgarian Photovoltaic Association met with members of the Cabinet of EU Energy Commissioner G?nther Oettinger in Brussels on January 8.

The discussion revolved around the amendments to the Renewable Energy Sources Act adopted by Parliament on December 5, 2013, introducing restrictions on the production of green energy and imposing a 20% tax on the revenues of wind farms and photovoltaic plants, according to a media statement of the BPVA.

"We were assured that the subject has the full attention of Commissioner Oettinger and of President Barroso.

We received a letter from the General Secretariat of the European Commission, prepared as mentioned in it, at the request of President Barroso," the BPVA informed in its press release on Sunday.

According to the BPVA, "the letter says:

„As you are aware, the European Commission has repeatedly expressed concerns over any measures that retroactively disrupt the economic conditions of existing renewable energy investments, as they threaten to undermine investor confidence. However, in the case of Bulgaria, the European Commission is well aware of the already existing structural deficiencies in the energy sector, particularly in terms of organization, generation adequacy and costs structure, as well as electricity prices. Substantial financial deficits accumulated throughout the Bulgarian electricity sector over the last years. In order to balance both the need to reduce and eliminate the deficit and to maintain the viability of existing investments, including in renewable energy, we have provided the Bulgarian government, in May 2013, with a set of recommendations on short and long term reforms. Whist windfall profits of public and private investors should be avoided to keep energy bills in check, it is important also not to undermine the investment climate in Bulgaria by measures which are, or can be perceived as, arbitrary or improvised."

The General Secretariat of the European Commission pays particular attention to the guidance document for state intervention in the electricity sector adopted in November 2013, which provides best practice principles on designing and reforming support schemes for renewable energy, although these guidelines do not have a legally binding effect on the Member States: "It [the guidance document] also

advises Member States against unannounced and retroactive scheme changes, including by means of setting taxes on revenues from renewable energy."

Finally, the Commission informs that: "(...) we will raise these issues with the Bulgarian authorities to express our concerns as regards the continued economic viability of existing renewable energy installations in Bulgaria." It assures by its letter that: "(...) the Commission continues to actively monitor renewable energy policy developments in Bulgaria" and thanking for being informed it states that "(...) this matter (...) will continue to have our full attention."