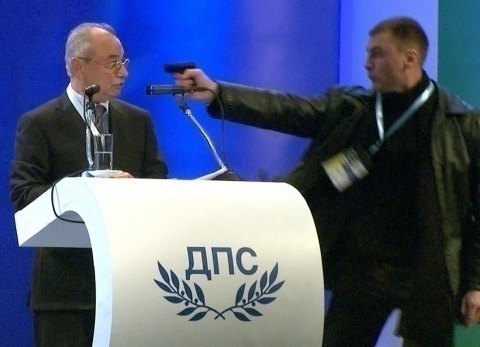 We present 10 photos that capture key moments of 2013 in Bulgaria. In a year of political turmoil, reviving social consciousness, and several sports glories - here is our pick (the shots are ordered chronologically).

1. (Above) A man ran onto the stage and pointed a gun at the leader of the ethnic Turkish Movement for Rights and Freedoms (DPS), Ahmed Dogan, during a party conference in January. Dogan was announcing his resignation from politics during the annual DPS congress. The attacker later confessed that his intention was not to kill Dogan, but only to scare him. 2. Bulgaria’s new Patriarch Neofit was elected by the Holy Synod of the Orthodox Church in February. The former Patriarch Maxim passed away at the age of 98 in November, 2012. On the photo, Patriach Neofit stands between President Rosen Plevneliev (L) and former PM Simeon Sax-Coburg (R) during his inauguration. 3. Bulgarian tennis star Grigor Dimitrov and Russian tennis beauty Maria Sharapova announced their relationship in the spring. Ever since, the two have become one of the most sought after sports couples by international and local media. 4. In May, Bulgarians went to the polls in early elections for Parliament, after the cabinet of former-PM Boyko Borisov stepped down in February amidst violent protests. Despite ousting the center-right GERB government, the results of the elections failed to calm the public. 5. Tens of thousands of Bulgarians march through Boulevard Tsarigradsko Shose in one of the most numerous rallies since the fall of Communism. The summer of protests led into the fall, and also the winter, however they gradually lost their scale. 6. A child carries the Bulgarian flag during the anti-government protests in Sofia this summer. The State Agency for Child Protection alarmed that the increasing number of children brought to the protests is a dangerous trend, keeping in mind the occasional escalation of tensions and violence during such gatherings. 7. Bulgaria’s heavyweight boxer Kubrat Pulev punches American Tony Thompson during their IBF match in August. Pulev became only the second boxer after Wladimir Klitschko to defeat Thompson over the past decade. The Bulgarian concluded another successful year and now awaits a clash with the Ukrainian super-champion. 8. Police in Sofia try to remove a girl tied to a bench during the anti-government protests in the capital. The protests against PM Plamen Oresharski’s government began in mid-June after the controversial appointment of notorious MP Delyan Peevski as Head of the State Agency for National Security (DANS). 9. Bulgaria experienced an increasing wave of refugees coming into the country, many of whom mothers and children. The ongoing Syrian conflict is likely to project similar trends into the next year as well, although Bulgaria is building a controversial fence along its border with Turkey. The government was also criticized by international organizations for the poor conditions in the refugee reception centers, as well as the slow processing of asylum statuses. 10. Bulgaria’s Grigor Dimitrov lifts the winner’s cup at the Stockholm Open in October. Dimitrov defeated world number 3 David Ferrer in the final to grab his first ATP series title. Dimitrov started the year in 48th place, but climbed up to 23rd in the rankings by the end of 2013.