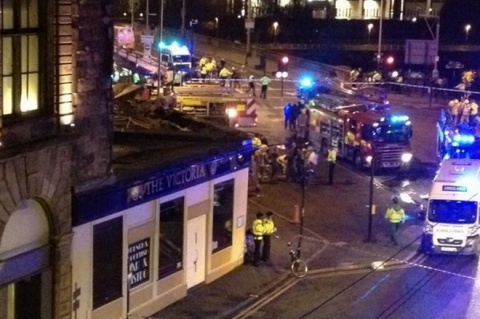 It is not known how many people remain trapped inside a Glasgow pub after a police helicopter crashed into it. Photo www.mirror.co.uk

A police helicopter has crashed into a popular pub in Glasgow and there are fears that many are still trapped inside.

The incident happened at The Clutha on Stockwell Street at 10:25 pm Friday.

Scotland police say there were three people onboard the helicopter - two officers and a civilian pilot, which are presumed to be the three victims of the crash.

32 people have been taken to local hospitals. It is not known how many people remain trapped inside the pub.

The BBC reports that about 120 people were in the pub at the time of the crash to attend a concert. Many were rescued or escaped but others have been trapped by a collapse on the left-hand side of the building.

The area is sealed by the police, who say they had made contact with some of the trapped people, but the building was unsafe and they were taking great precaution.