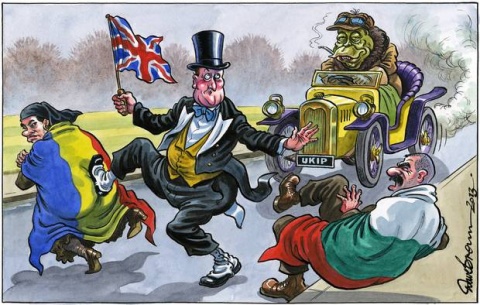 The British daily "The Independent" has dedicated its daily cartoon Thursday to the hot issue of opening the country's labor market to Bulgarian and Romanian emigrants.

The cartoon pictures British Prime Minister, David Cameron, kicking out of his way emigrants, wrapped in Bulgarian and Romanian national colors, to make way to a troll-like creature with the inscription UKIP (Independence Party).

UKIP is a far-right populist and Eurosceptic party which has been leading a strong campaign against opening the country's labor market for Bulgarians and Romanians in January 2014, instigating fears among society of increased crime wave after their arrival.

Meanwhile, British media write that their PM will travel to Eastern Europe on Thursday to attend the third Eastern Partnership summit in Vilnius and to urge EU leaders to put an end to the era of "vast migrations" from poor countries to the west.