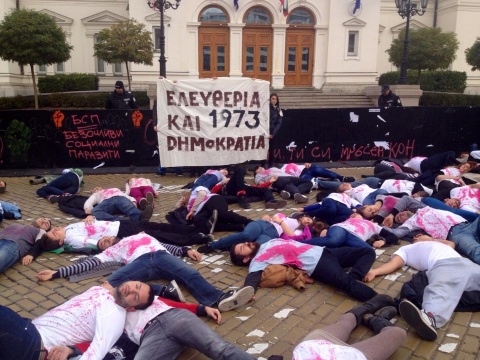 Students who recently occupied the main building of Sofia University arranged a performance Sunday recalling the November 17, 1939 and 1973 storming of universities in Prague and Athens by armed forces.

The action was part of the occupiers' honoring of International Students' Day.

The day was declared November 17 in remembrance of the 1939 occupation of Prague's Charles University and its brutal crushing by Nazi armed forces on November 17 that year.

Sunday Bulgarian students walked out of Sofia University to the Parliament across the street, where some of them lied down on the ground, paint on their clothes to represent blood.

Their action carried a direct reference to the November 17, 1973 events at the Athens Polytechnic, when forces of the Greek military junta stormed the building, killing civilians.

They also carried a poster in Greek saying "Eleutheria kai demokratia", the slogan of the Athens Polytechnic uprising, meaning "freedom and democracy".

They have requested the resignation of PM Plamen Oresharski and the dissolution of the current parliament.

The protest is seen as a continuation of strong June and July anti-cabinet rallies in Sofia.

Tuesday students tried to stage a blockade of Parliament in Sofia and clashed with riot police.