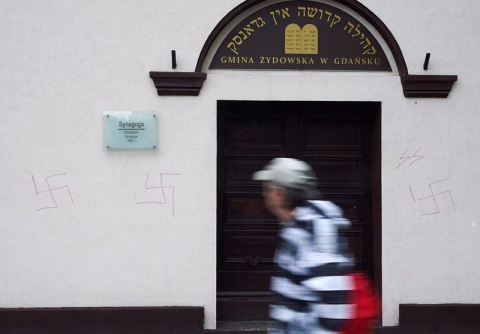 Swastikas and a runic Sig of the Schutzstaffel (SS) are seen on the front wall of synagogue building in Gdansk, Poland, 04 Navember 2013. Photo by EPA/BGNES

Many Jews in Europe say anti-Semitism is increasing, particularly on the internet, according to a survey by the EU's Fundamental Rights Agency (FRA).

The survey of 5,847 Jewish people said 66% of those who responded considered anti-Semitism to be a problem.

Three out of four respondents, 76%, believed anti-Semitism had increased over the past five years.

The survey was carried out in 2012 in eight countries which are home to about 90% of the EU's Jewish population.

Respondents in Belgium, France, Germany, Hungary, Italy, Latvia, Sweden and the United Kingdom were asked to give "their opinions and perceptions on anti-Semitic trends and anti-Semitism as a problem in everyday".

They were also asked about their personal experiences and worries about their own safety and that of family members.

There was particular concern about anti-Semitism online. About three-quarters of respondents considered that to be a problem which is getting worse.