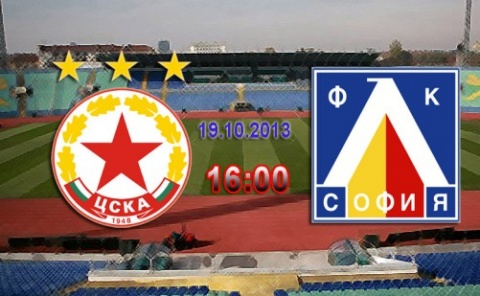 Bulgaria's most popular football clubs CSKA Sofia and Levski Sofia will meet on Saturday in the 13th round of the domestic league.

The "Eternal Derby" is Bulgaria's most anticipated local match every season, bringing heated encounters both on and off the pitch. CSKA and Levski share a total of 57 league titles between themselves.

This season's first derby comes at a difficult time for both sides, and they will be keen to come out as winners. CSKA hold 4th position with 23 points, while Levski are 6th with 19. Leaders and current champions Ludogorets Razgrad have 28.

Levski, who recently fired their head coach Slavisa Jokanovic, cannot afford to lose the game, in their hopes to land a first league title since 2009.

Newly appointed head coach Antony Zdravkov will be able to rely on most of his key players, except the long-term injured Stefan Velev.

CSKA's Stoicho Mladenov will have a few more doubts ahead of the derby, with Emil Gargorov, Apostol Popov, and Jeremy Faug-Porret all complaining of slight injuries. The team's doctors will assess their condition prior to the match to determine if they will be eligible.

Last season, the two teams each won once in their direct encounters.

The match will kick off at 4 PM local time in Sofia's Vasil Levski National Stadium.