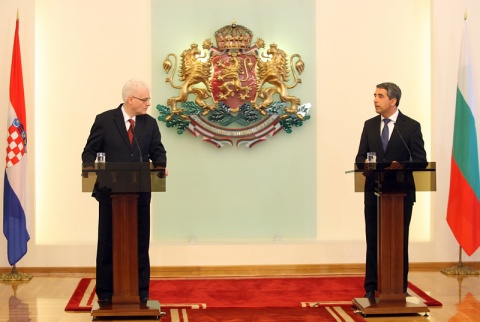 The Presidents of Bulgaria Rosen Plevneliev (R) and Croatia Ivo Josipovic (L) met in Sofia on Monday. Photo by BGNES

Plevneliev spoke after meeting the President of EU newcomer Croatia Ivo Josipovic, who is on an official visit to Sofia Monday.

"It is evident to all concerned that Bulgaria and Romania are ready, that we are working on our borders effectively, and, as I would say, much better than some other countries," said the Bulgarian President.

"The European Commission has resolutely stated that Bulgaria and Romania are technically ready for Schengen," added he.

The Bulgarian President suggested that the delay is motivated by national politics in some EU member states.

"Schengen is not a matter of politics in one or another country. Big politics is the politics of common EU responsibility and solidarity," stressed the Bulgarian President.

"Bulgaria has acted responsibly, it has invested hundreds of millions and is effectively guarding its Schengen border. And so it should be expecting solidarity from the rest of Europe. Because we also suffer serious economic damage from this in-between position we are finding ourselves straddled with," said Plevneliev.

During their talks, the Bulgarian and Croatian Presidents discussed the EU perspective of other countries in the Western Balkans, as well as the furthering of economic and cultural relations between their two countries.