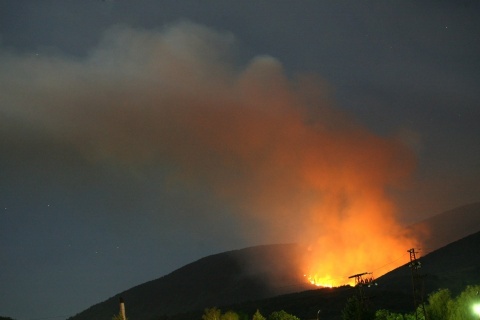 The July 2012 Vitosha wildfire as seen from Bulgarian capital Sofia. Photo by BGNES

Prosecutors in Sofia have announced they have formally stopped the investigation of the July 2012 wildfire on the Vitosha mountain near the Bulgarian capital.

The investigation was formally started against an unknown perpetrator due to the high public interest in the case.

The Vitosha wildfire blazed at a time when Bulgaria was shaken by the so-called Forestry Act controversy.

Strong street protests in Sofia rallied against amendments to this act, said to benefit ski operators and lumber companies by easing access to forest areas.

The Vitosha Ski company, which operates facilities on Vitosha, was pivotal in pushing through the controversial amendments, said protesters.

The Vitosha wildfire engulfed some 75 acres of protected coniferous forest in a hard access areas; it was battled for days by firefighters, volunteers and army helicopters.

Reports by hikers on the day the fire broke out said they sow how smoke started to rise in short intervals from three different areas of the Bistrishko Branishte reserve.