Putin: US Strike on Syria Could Overthrow Intl Law, Order 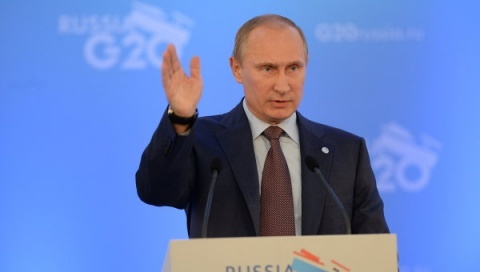 Russian President Vladimir Putin has used an article in New York Times to severely censure the US position on Syria, as diplomatic efforts are under way to avoid a US strike.

A one-sided American intervention "could throw the entire system of international law and order out of balance," writes the Russian President.

Putin warns that such a move will not only be detrimental to the whole region, in particular Israel-Palestine relations, and the negotiations on Iran's nuclear program, but also for the whole world.

He stresses that a military move withouth the sanction of the UN will run directly counter international law established after WW II, and constitute nothing less than "aggression."

"It is alarming that military intervention in internal conflicts in foreign countries has become commonplace for the United States," says Putin.

The Russian President further said, counter to US claims, that there are enough reasons to believe chemical weapons were used by rebels, and not by forces of Syrian President Bashar Al-Assad.

Many of those fighting amongst the rebels in Syria are no friends of democracy, and should be viewed as terrorists, added the Russian President.