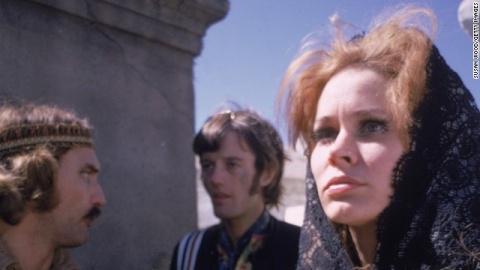 Karen Black acted opposite Dennis Hopper and Peter Fonda in "Easy Rider" in 1969. Photo by CNN

Karen Black, who starred in a string of major films in the 1970s and earned an Oscar nomination for Five Easy Pieces, has died after losing a long and public battle with cancer.

“It is with great sadness that I have to report that my wife and best friend, Karen Black has just passed away, only a few minutes ago,” he wrote on Facebook. “Thank you all for all your prayers and love, they meant so much to her as they did to me.”

Black was diagnosed with ampullary cancer in 2010.

She took her fight to overcome her illness to a crowd-funding website earlier this year, raising thousands of dollars to pay for treatments she hoped to get in Europe.

Her husband posted a message to donors Wednesday - just hours before her death - explaining that over the last months her "health continued to deteriorate at an alarming pace."

Black appeared in Nashville, The Day of the Locust, Airport 1975, The Great Gatsby, and Family Plot — Alfred Hitchcock’s final film. She was nominated for an Oscar for her role in the 1970 film "Five Easy Pieces."