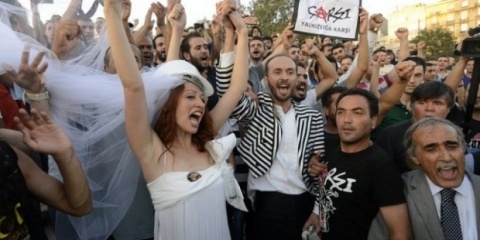 Istanbul newlyweds Nuray, a trained nurse, and Ozgur, a partially trained doctor who abandoned medical school, met in the first days of the unrest in Gezi Park. Photo by EPA/BGNES

A newlywed Turkish couple has celebrated their vows under water cannon in the emblematic Gezi Park in Istanbul.

The bride Nuray, 32 and the groom Ozgur, 34, have met a month ago during the first wave of the Gezi Park protests and were called by Turkish press "the love story of the upraising."

The bride wore a white hard-hat over her bridal veil.

Thousands of supporters of the protests responded to their social networks announcement they will wed on July 20th and on the invitation to attend their celebration in Gezi.

They were met by a large number of riot police who blocked the access to the nearby Taksim Square. In the ensuing clashes, the policemen used water cannon to disperse them.

The demonstrators continued to shout anti-government slogans on side streets and the main "Istiklial" boulevard.

No casualties or arrests were immediately reported.

The Istanbul protests began on May 28 over plans to redevelop Gezi Park.

The US and the EU expressed concern over Turkey's handling of the protests and Amnesty International condemned the police's tactics.

The Huffington Post reminds that five people have died in the protests, including one person who was severely beaten in the head and another who was hit by a bullet fired by a police officer. Thousands of people were injured or affected by tear gas – among them a dozen who lost eyes after being hit by canisters.

Since June, there have been sporadic protests, but they've attracted fewer people.

The government continues to arrest protest participants – including high school students or activists – on allegations of inciting unrest. One man was even arrested and charged for selling flags at the anti-government rallies.