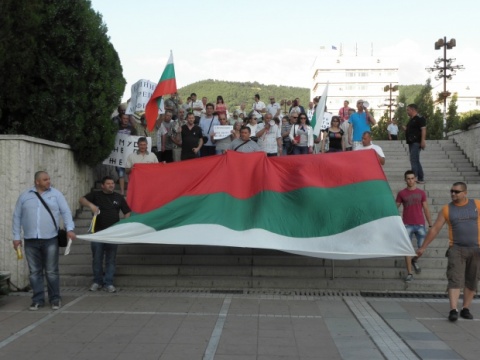 Protesters in Bulgaria's southwestern city of Blagoevgrad paid homage to a policeman who passed away in the capital Sofia one day ago. Photo by BGNES

No protest actions were held in front of the district administration in Bulgaria's southwestern city of Blagoevgrad on Thursday morning.

Instead, protesters decided to pay tribute to the memory of the policeman who died at his home in the capital Sofia Wednesday morning after working the Tuesday evening shift at the mass anti-government protests.

"We respect Bulgarian policemen and women who are doing their jobs, we respect the statehood. This is why today we will not protest against the appointment of Musa Palev for Regional Governor. But in the coming days the protests against him will continue," the demonstrators said as cited by "Standard" daily.

They lit candles in memory of the deceased police officer and put them on the pile of stones gathered in front of the municipal administration.

Protests against the appointment of Musa Palev from the liberal ethnic Turkish party Movement for Rights and Freedom (DPS) for Regional Governor have been taking places since his first work day on June 17.

Protesters agreed that having a DPS representative for a governor of Blagoevgrad was unacceptable.

So far, nearly 5 000 signatures for Palev's resignation have been collected from residents of Blagoevgrad and the area.

Palev is firm he would resign as people have nothing against him, except his religion.