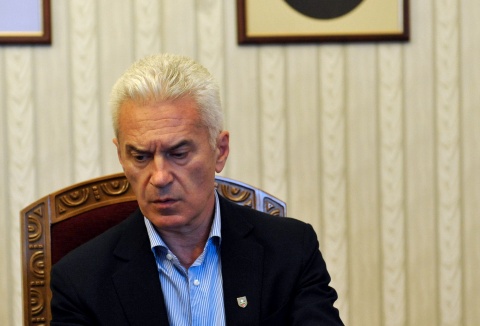 The Citizens for European Development of Bulgaria party, GERB, vowed to sue nationalist leader Volen Siderov for slander over his statement that notorious businessman Mihail Mihov had been killed to cover up ex- Prime Minister Boiko Borisov's crimes.

GERB's press office announced Tuesday that the party would not engage in an exchange of accusations and explanations through the media with a "patently mentally unstable man", adding that they would meet Siderov in court.

"We can categorically state that Siderov will be sued for his defamatory remarks concerning the Chair and the Deputy Chair of the party, Tsvetan Tsvetanov and Boyko Borisov," the center-right party said.

GERB urged Siderov to apologize and disown the libel and insults he disseminated through media outlets in order to avoid the penalty envisaged under Bulgarian laws.

"We would like to remind him that nobody is bigger than the letter of the law and he, who believes himself to be a man actively involved in the process of lawmaking, must not commit a crime," GERB said.

Volen Siderov, leader of nationalist party Ataka, argued in a Tuesday interview for the morning broadcast of TV7 that Bulgarian businessman Mihail Mihov, a.k.a Misho Birata (Misho the Beer) had been killed.

Citing "very reliable off-the-record information" from insiders from Borisov's formerly ruling center-right party GERB, Siderov insisted that Mihov had been injected with poison simulating the signs of a heart attack.

The nationalist leader claimed that the murder aimed at covering up Borisov's deeds had been masterminded and ordered by his Deputy and former Interior Minister, Tsvetan Tsvetanov, and had been carried out by an organized crime group.

Controversial businessman and head of the Bulgarian Basketball Federation Mihail Mihov, was found dead in a hotel room on March 30, 2011.

Mihov's body was found in the RIU Pravets Resort Hotel, in the town of Pravets, northeast of Sofia, which, according to unofficial information is owned by tycoon Valentin Zlatev, CEO of fuel retailer Lukoil Bulgaria.

According to official autopsy results, Mihov passed away from "rapid heart failure over acute coronary deficiency." The autopsy report was sent to the Sofia Prosecutor's Office.

In mid-January 2010, Mihov made headlines with his involvement in the "Tapegate" scandal. At a press conference in January, the Galeria weekly released a recording of a conversation between Borisov and the head of Bulgaria's Customs Agency, Vanyo Tanov, informing that Borisov had provided a cover-up for Mihov.

The tapes revealed that Borisov had called Tanov to order him to immediately pull out all customs inspectors from Mihov's brewery as the probe violated an agreement sealed between the businessman and Bulgaria's then-Prime Minister.

The authenticity of the compromising tape was never unconditionally proven.