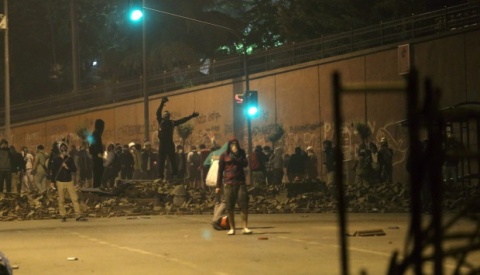 Protests in neighboring Turkey against the authoritarian and Islamic-leaning policy of the Turkish government continued Wednesday night into Thursday morning for a sixth straight day. Photo by EPA/BGNES

About 30 people have been arrested in the Turkish coastal city of Izmir on charges they had been posting "misinformation" on Twitter.

Two Bulgarian bloggers are among them, according the "Rhodoppe 24" media outlet, citing Bulgarian expats in Izmir. It remains unclear if the two are Muslims with Bulgarian passports.

The bloggers are accused of using social networks to incite unrest and for anti-government propaganda. 38 apartments have been raided by the police in Izmir. Arrest warrants have been issued for another 14 Twitter users.

The detained - young men and women, all in their early 20s - had posted as few as two tweets informing protesters of the location of police activity and roadblocks in the city. Relatives fear they would be charged with criminal incitement.

Turkish Prime Minister Recep Tayyip Erdogan has strongly criticized social networks, singling out Twitter, which he said was "an extreme version of lying and a menace to society."

The BBC's cites their correspondent in Izmir in saying the attack on social media showed just how disconnected the two sides are.

Protests in neighboring Turkey against the authoritarian and Islamic-leaning policy of the Turkish government continued Wednesday night into Thursday morning for a sixth straight day.

The protesters are now calling for the police chiefs in all cities, where rallies took place, to be dismissed.

They also want a ban on the use of teargas, the release of detained protesters, the dismissal of Istanbul's governor, and the scrapping of plans for the redevelopment of Gezi Park in Taksim.