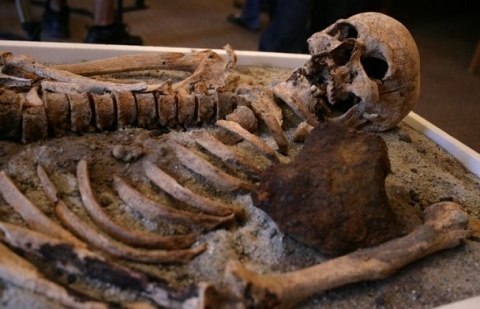 In 2012, Bulgarian archeologists claim to have found a vampire skeleton in the Black Sea town of Sozopol over the iron stick piercing the chest. Photo by BGNES

Residents and guests of the Bulgarian capital Sofia can see the reconstructed face of the "vampire from Sozopol" over the weekend and for few days next week in the National History Museum, NIM.

The news was reported by NIM's Director, Bozhidar Dimitrov, cited by the Focus news agency.

Dimitrov says that after the Sofia exhibit, the vampire will be returned to the historical coastal town of Sozopol, where it was discovered one year ago, as it was eagerly expected there.

"He should stop resting in Sofia and should go to the Black Sea coast to make money," he joked.

The skeleton is the one of a man with an iron stick in his chest. He was buried over 700 years ago and was stabbed multiple times in the chest and the stomach, as his contemporaries feared that he would rise from the dead as a vampire.

According to Yordanov, he lacked a number of teeth due to the food he consumed, while the face's traits were strikingly asymmetric.

Dimitrov says the above backs his theory the vampire's name was Krivich (The Crooked) and he was a legendary pirate, manager of the Sozopol fortress or one of his heirs.

Bulgarian tour operators continue to report that the interest has been huge with foreign travel agencies advertising "vampire vacations" in Sozopol.

The "vampire" skeleton was included in the National Geographic ranking of the 10 most popular news pictures for 2012. According to the editors, it shows that the fear of vampires is much older than Bram Stoker's Dracula.

The National Geographic TV channel aired a film about the "vampire," featuring the historical town of Sozopol for the second time, after a documentary about the relics of St John the Baptist, also discovered there.

After the discovery, media in the US, Europe, and Asia all broke the news in the press and in online editions.