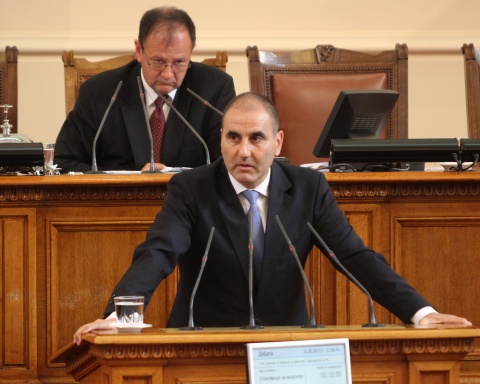 Tsvetan Tsvetanov, former Interior Minister and Deputy Chair of center-right party Citizens for European Development of Bulgaria (GERB), has reiterated that he is not concerned about the ongoing investigation into his activities, claiming that he is innocent and he always defended the interests of the state.

"I can tell you categorically that I am innocent," Tsvetanov told journalists Thursday, commenting on the announcement of Chief Prosecutor Sotir Tsatsarov earlier the same day that he had submitted to Parliament a request to clear the launch of criminal proceedings against the former Interior Minister.

Tsvetanov, as cited by 24 Hours daily, assured that his activities during his term in office as Interior Minister had always been driven by public interests and had been concentrated on the fight against serious trans-border organized crime.

He emphasized that all reports of the European Commission mentioning clear political will, and reforms implemented by the Interior Ministry in the sphere of security had been the product of the efforts of Interior Ministry professionals, the GERB government headed by Prime Minister Boyko Borisov, and the Parliament which had approved the legal amendments which had resulted in tangible results outlined in the reports of the US Department of State.

Tsvetanov refused to comment on accusations by the Chief Prosecutor that he had failed to exercise proper control over Interior Ministry officials and the use of special surveillance equipment during his term in office, adding that the claims were plainly ridiculous.

The "Bulgarian Watergate" scandal unfurled at the end of March when Sergey Stanishev, leader of the Bulgarian Socialist Party (BSP), submitted a tipoff to Chief Prosecutor Sotir Tsatsarov about alleged illegal wiretapping of politicians, businesspeople and magistrates which had taken place during the rule of Prime Minister Boyko Borisov's center-right GERB party (2009-2013).