Bulgaria with Highest Material Deprivation Rate in EU27 in 2011 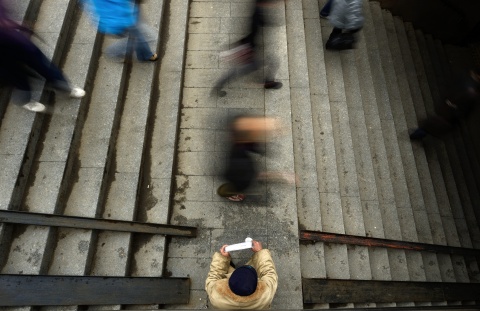 People walk past a beggar at a subway stop in Sofia, Bulgaria, 22 February 2013. Photo by EPA/BGNES

According to a Eurostat report on population at-risk-of-poverty or social exclusion, Bulgaria had the highest share of people living in material deprivation in the EU-27 in 2011.

The proportion of people that were materially deprived was highest in Bulgaria (60.1 %), Latvia (49.2 %) and Romania (47.7 %) among the EU Member States, with more than half of the materially deprived in each of these countries experiencing severe material deprivation, according to information of the EU's Statistical Office.

Those EU Member States with the lowest proportions of the population considered to be at-risk-of-poverty or social exclusion in 2011 were the Czech Republic (15.3 %), the Netherlands (15.7 %) and Sweden (16.1 %); Iceland (13.7 %) and Norway (14.6 %) also reported a relatively low share of their respective population as being at-risk-of-poverty or social exclusion.

About one in every six (18.2 %) members of the EU-27 population was materially deprived in 2011, with just under half of these (8.8 % of the total population) being considered as experiencing severe material deprivation.

In absolute terms, the figures for Italy, Spain and Greece had the greatest upward impact on the number of persons considered to be at-risk-of-poverty or social exclusion in the EU-27 in 2011.