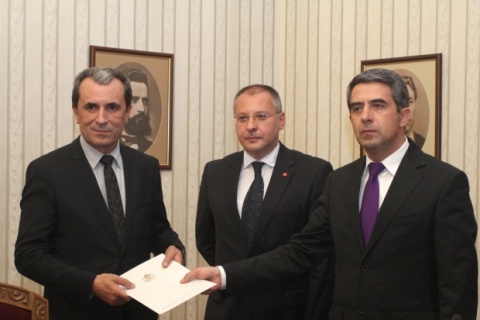 From left to right - Plamen Oresharski, Sergey Stanishev, and Rosen Plevneliev at the handing of the mandate to the Socialists, photo by BGNES

Plevneliev spoke at a special press conference after giving the mandate to the left-wing Bulgarian Socialist Party, BSP, and its nomination for Prime Minister, Plamen Oresharski, to form the Cabinet.

The President stated that the entire country was eagerly anticipating results while crises can be overcome with systematical and consistent actions.

"The time of political declarations ended on May 13, the day after the early general elections. The 42nd General Assembly started work already. I hope this Parliament will demonstrate clear commitments to convince Bulgarian society it can lead it out of the crisis. It is important for political leaders to show statesmanship and unite around the common problems of the country. We need a strong foundation for the government," said he.

Plevneliev noted he has listened carefully all day Thursday during the consultations to the views all parliamentary represented parties and became even more convinced Bulgaria is facing serious challenges.

He stated the most important thing that emerged from the talks was the fact Oresharski, Stanishev, and the leader of the ethnic Turkish party, DPS, Lyutvi Mestan, have demonstrated a firm commitment to act responsibly and to undertake the heavy burden. The Head of State added he was impressed by the serious work they have done in just days and by the advancement of their blue print.

"The Citizens for European Development of Bulgaria party, GERB, returned the mandate and I immediately gave it to the second largest group in the Parliament – the Socialists. I gave two mandates in one day because people expect decisive actions. I wish success to Mr. Oresharski and to BSP leader, Sergey Stanishev. I will not take part in any negotiations and bargaining in forming the next Cabinet," the President concluded.