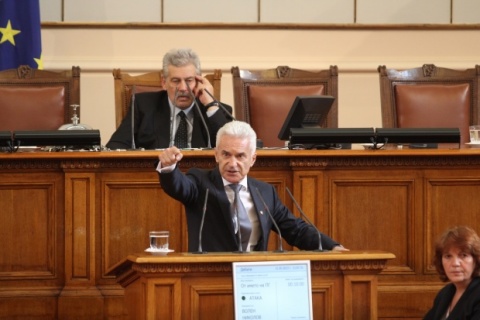 Bulgarian nationalist leader, Volen Siderov, addressed the Members of the Parliament, as the 42nd General Assembly convened for the first time. Photo by BGNES

Bulgaria's the far-right nationalist Ataka will not support any government that would be appointed within the term of the 42nd Parliament, according to its leader, Volen Siderov.

Siderov addressed Tuesday the Members of the Parliament, as the 42nd General Assembly convened for the first time.

He declared his party could not have anything in common with the ethnic Turkish Movement for Rights and Freedoms, DPS, as they were an anti-constitutional formation.

"Bulgarian nationalism is a factor in the country's politics that cannot be ignored. I call on the leadership of the Citizens for European Development of Bulgaria party, GERB, to not speculate about a Three-Way Coalition between us, DPS, and the Bulgarian Socialist Party, BSP, as they will face our firm objection and opposition. GERB is yet to feel real pain. They should stop their intrigues and non-sense. Enough with your stealing, cheating, racketeering, and purchasing Members of the Parliament," Siderov shouted from the parliamentary tribune.

He stressed that the people did not give power to GERB or BSP, but elected Ataka as their eyes and ears.

"We will be your nightmare as we will fight any political bargains. Former Prime Minister and GERB leader, Boyko Borisov, just stated that he would support the Socialists' nomination for his successor – ex-Finance Minister, Plamen Oresharski. I would NOT support Oresharski. How many times did I warn you – follow the interests of Bulgarian people, otherwise you will stumble and fall and it will hurt. You were grinning with self-satisfaction; you were mocking me in believing you will be in power for ever. Now the grins will freeze," the nationalist stressed.

He also brazenly turned towards foreign diplomats in attendance and explained to them that half million Bulgarians lived with EUR 73 a month.

"Don't come here well fed and satisfied and dictate from Brussels how to make democracy in our country. Come here, down to earth, down to the people and see how they live," said Siderov.

It emerged meanwhile that the 23 elected Members of the Parliament from Ataka took the oath of office, but purposely failed to register for voting.

Thus, 217 MPs out of the total 240 registered for casting a vote, lowering the needed quorum from 121 to 109, which allowed BSP and DPS to elect the new Speaker of the Parliament without the need of support from GERB and Ataka.

GERB gathered 30.503% of the votes in May 12 early general election, final results show.

According to the final CEC count – GERB + Ataka will have together 120 seats and DPS + BSP – another 120 in the 240-seats unicameral Parliament.