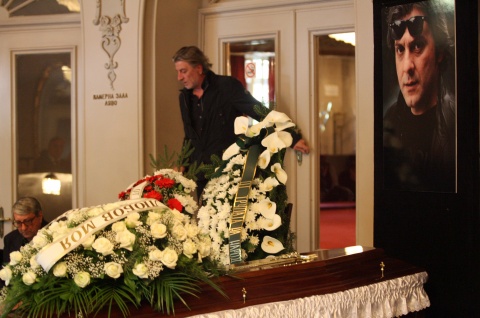 Chocho, as all who loved him called him, died aged 48 at the Pirogov Emergency Hospital early Sunday morning following what is considered to be a tragic accident. Photo by BGNES

Relatives, friends, colleagues and public figures bowed heads in memory of beloved actor Petar Popyordanov, Chocho, who died much before his time on the eve of Easter.

Chocho, as all who loved him called him, passed away aged 48 at the Pirogov Emergency Hospital early Sunday morning following what is considered to be a tragic accident.

The actor died as a result of severe head trauma after falling from a two-meter-cliff at a private cemetery in Sofia, close to the grave of his mother, who died just last month.

A great artist and an outspoken rebel with a troubled soul, Chocho has been battling an alcohol addiction for years, but his girlfriend said he was sober when the tragic accident occurred.

The popular actor was buried next to his mother’s grave, not far away from the place where he was fatally injured.

Petar Popyordanov was born June 11, 1964 in Sofia. He graduated acting at the National Theatre Academy in the class of Prof. Krikor Azaryan.

Chocho played on the stages of "Off the Channel", “Small City Theatre” and "Ivan Vazov" National Theatre, starred in many feature and TV films and series, including the "Club UFO" TV show which earned him great popularity.

He was pronounced Best Young Actor Award of the Union of Bulgarian Actors (1992); won the biggest recognition for actors in Bulagria "Askeer" in two consecutive years (1996, 1997). He was also presented with the Belgian "Golden Bayar" Award for Best Male Role for the film "Frontier".