Bulgaria's Angry Young People: We Rallied for Our Kids' Future 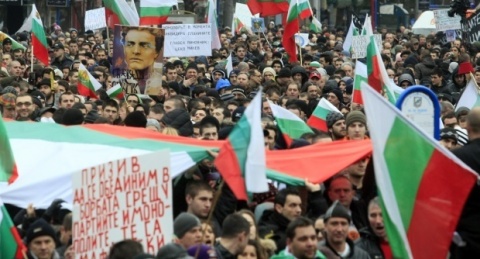 This winter street protests erupted in Bulgaria against the whole political elite and its friends in business. Photo by BGNES

Maria Georgieva is one of the voices of young Bulgarian protesters, who took to the streets in February. She was a regular demonstrator at the mass protests in the coastal city of Burgas, sparked by excessive utility bills, but later morphing into political rallies

“It is really hard to single out a list of the protesters' demands. The people who took to the streets in February had quite different ideas about what will fix the heavy crisis Bulgaria is in.

Some thought that the current form of governing is good enough and will work well provided that new – qualified and honest -people are installed to replace today's crooks.

Others called for replacing the current form of governance with the so-called “direct democracy”, a form of democracy in which people vote on policy initiatives directly, as opposed to a representative democracy in which people vote for representatives who then vote on policy initiatives. They claimed that would make possible for every single Bulgarian to put forward his or her idea about how to improve life in Bulgaria.

I personally prefer the second model. I believe that the difficult times in which we live require us to be united and entrepreneurial. What brings us together will make us stronger. Of course, there are mavericks and misunderstandings as far as the organizational activities and the protests are concerned, but that's life.

I was very disappointed to see many dishonest people, whose sole aim was to gain personal benefits.

There are traitors, there are those who have not reached the level of awareness to understand how important it is to fight for the common good, not only for one’s personal well-being. Petty, hypocritical people, people who suddenly decide they are born to be nothing less than leaders... These people are part of Bulgaria’s protests, but that’s just life and human weakness is part of it.

There are undercover agents embedded among the protesters. But until they stab you in the back, it is very difficult to know who is who.  Generally speaking, their aim is to undermine the protests by replacing the demands of protesters, promote the goals of a particular party, hamper protests, slowing down the process they could trigger. Sadly, they succeed in their mission!

Of course, it is no secret that a handful of the leaders of the protests spawned their own parties. We do not really know the truth about them. But we do know that they acted behind the curtains and without informing the other 100 organizers of the protests from across Bulgaria, which speaks volumes about their honesty.

My hopes and expectations are that the people of Bulgaria will wake up. Everything I do, everything I've done for the last three years had one humble goal - change the world, bring people to their senses and make them realize we are all connected and can make the change only together.

Let's say no to self-destructive behavior. Right now we are living in a parallel reality – deep inside we are not consumers, we are not voters comes elections time, we are not employees – we are all humans. We have feelings and we expect people to be sensitive enough, we need the freedom and opportunity to build future for our children!

If we want to change our society, people should change first, their aspirations too. A new era is dawning and there is no room for personal interests and methods we have become sick to death of for the last 23 years.

It is time to for us to wake up our minds and our souls, it is time for all of us to unite and be as one.