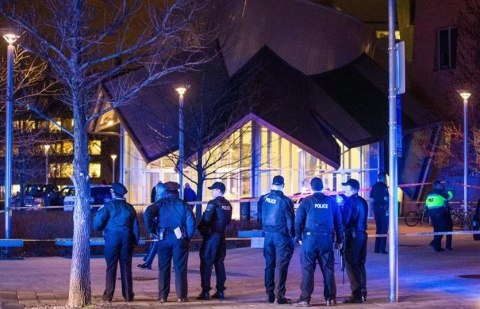 Photo by the Boston Globe

One suspect in Monday’s Boston Marathon bombings has been apprehended, the Boston Globe has stated, citing an official with knowledge of the investigation.

Another suspect reportedly remains on the loose in the suburb of Watertown after a firefight with police.

Violent incidents early Friday, including the shooting death of a college police officer, kept Bostonians on edge just days after the bombing of the iconic Boston Marathon.

The nightly mayhem began, after a university police officer died in a shooting on the Massachusetts Institute of Technology campus in Cambridge late Thursday, CNN infroms.

The MIT officer was responding to a disturbance when he was fired upon, according to the state district attorney's office. He sustained "multiple gunshot wounds."

State police and the FBI were called in after the shooting and found the campus policeman near Building 32 on MIT's campus. The grievously wounded officer was taken to Massachusetts General Hospital, where he was pronounced dead.

Dozens of officers surrounded and cordoned off the building, known as the Stata Center, which houses computer science laboratories as well as the department of linguistics and philosophy.

The university, which lies adjacent to the city of Boston, requested people stay away from the building as police considered the situation potentially dangerous.

An hour later, police were chasing suspects in a hijacked vehicle just in Waterton, less than five miles away from the campus.

The violent events at MIT and Watertown appeared to be connected, and federal authorities were investigating whether the violence of Thursday night and Friday was connected to Monday’s marathon bombings.