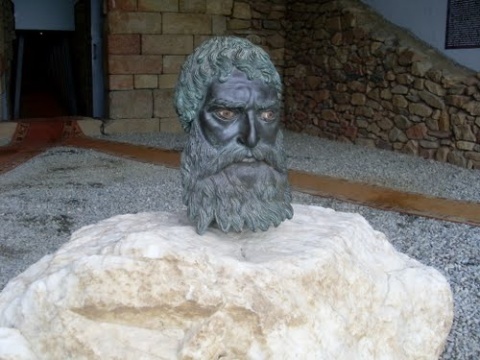 The Italian Embassy provided support for the study and conservation of the head of the bronze statue of the Thracian ruler Seuthes III, discovered in 2004 by Georgi Kitov . Photo from panoramio.com

The unique exhibit "The Sword of King Seuthes III" is opening Wednesday at the National History Museum, NIM, in the Bulgarian capital Sofia.

The exhibit is organized in partnership with the "Iskra" (Spark) History Museum in the central town of Kazanlak, the Italian Embassy, the Italian Cultural Institute in Sofia, and Unicredit Bulbank.

In 2004 Bulgarian archeologists made headlines all over the world after discovering the oldest and largest Thracian tomb unearthed on Bulgarian land from beneath the Golyamata Kosmatka mound.

The archaeological team was headed by late Georgi Kitov. The excavations revealed a 13-metre long passage and two halls walled up with stones behind the facade. One was used for the ritual symbolic burial of Sevt III (Seuthes) and the other for the ritual sacrifice of a horse.

The tomb amazed the archaeologists with its first-of-the-kind doors made of marble and decorated with human figures, iron nail imitations and blue-end-red sculptural ornaments.

Some of the burial artifacts discovered in the tomb include a golden wreath, golden horse trappings and sword decorations, silver and bronze jewels, crafted ceramics, including three big wine amphorae, one of them – sealed, golden coins of Seuthes III, a silver jug, a silver phial, a bronze helmet depicting the goddess of victory, Nike, two knee-guards, more metalwork depicting an elegant head of a stag, a head of an African man, a double-handled gold ritual vessel for wine drinking, a breastplate armor-collar, an iron sword with gold decoration that covers the handle and sheath, and spearheads, among others.

A bronze head of Seuthes III was found outside. The mask is part of the permanent exhibit of NIM.

Italian experts took active part in the restoration of the priceless finds.

The exhibit in Sofia highlights the weaponry of the Thracian ruler, with the sword being the centerpiece.

The exhibit will be open for visitors from April 11 until May 8.