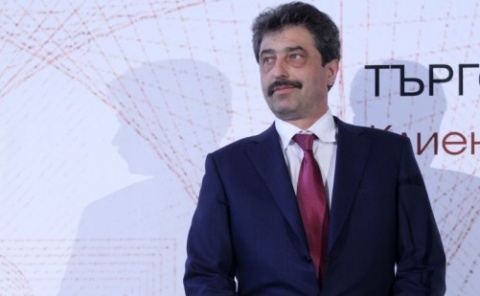 Vassilev has made the statement in an interview for the Austrian Der Standart daily, published Monday.

The banker, who in his country is often accused of having a suspected monopoly on media, impeding its freedom, says there is "too much freedom in Bulgaria."

He further states it was obvious Plevneliev, who recently appointed the caretaker government, "could not stand him," while the circles around the President had interest in taking over the rule of Bulgaria.

"The problem is not the President having friends; the problem is that he is the product of the business circles around Capital daily with which he had common business interests in the past, along with a circle of NGOs, including the Open Society Institute," says Vassilev.

To a remark of the interviewing journalist that the President has been elected by the Bulgarian people after all, the banker replies:

"Due to the charisma of former Prime Minister, Boyko Borisov. Just make Plevneliev a political party leader and you will see the results. He protects business interests, not national ones. But as I say all this, this does not mean I would attempt any actions against the State or the government as I have not done it in the past."

In response to a question what it meant to be influential in Bulgaria, as he is seen as one of the country's most important men, he denies ever having anything to do with political bargaining and forming governments, stressing the economists in Borisov's Cabinet had come from the same business circles as the ones whose interests Plevneliev was protecting.

Vassilev also rejects accusations he had been using his media outlets to attack business rivals, noting the President is not a "sacred cow" and can be subject to criticism.

The Austrian daily also inquires about his media influence, reminding his alleged connection with "New Bulgarian Media Group," of media mogul and former Head of the State Lottery, Toto, Irena Krasteva, and her son, former Member of the Parliament from the ethnic Turkish party Movement for Rights and Freedoms, DPS, Delyan Peevski, who was recently and scandalously reinstated as investigator at the Sofia Investigation Office after the Parliament was dissolved.

"How free could media in Bulgaria be in this situation?" the journalist asks.

"You are painting a strange picture. We might actually have too much media freedom. In Bulgaria everyone can say or write anything in violation of all ethics," Vassilev replies.

Peevski, however, does not and never had a company registered in his name, while Vassilev prefers to present himself as media consultant for TV7.

In a TV interview at the beginning of February, former PM Borisov made an unprecedented admission that honorary, lifetime DPS leader, Ahmed Dogan and his party controlled a large part of media in Bulgaria, grounding it on the fact Peevski was a DPS MP.

Before Der Standart, Vassilev also denies he was "the banker of the State" and links to DPS and the Bulgarian Socialist Party, BSP.

To the question if he could be considered an oligarch, he says if such label meant a wealthy man, managing a number of businesses, then he was an oligarch similar to Bill Gates and Warren Buffet.

"But if you have in mind an individual who has influence in the government and uses his political connections for advancing his business, then I am not an oligarch," the banker concludes.

After Borisov's resignation on February 21st amidst huge protest rallies across Bulgaria, some the media outlets in the Krasteva-Peevski group, particularly TV7, shockingly changed course and from being pro-government became Borisov's strongest critics.

There were also a number of unconfirmed reports that publishers and editors-in-chief from the group have been instructed to attack Plevneliev in any possible way.