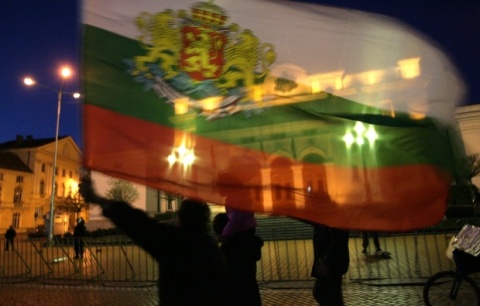 The plans for a new nationwide protest on March 3, Bulgaria's national holiday, remain. Photo by BGNES

Protesters and representatives of non-governmental organizations gathered Saturday at a second round table discussion in Sofia to discuss demands for changes to the Election Code and decide on the coordination of the nationwide rally scheduled for March 3.

The meeting attracted more participants than expected, which caused chaos and delayed the start of the discussion by over an hour, according to reports of the Bulgarian National Radio (BNR).

The protesters yet again voiced suspicions that representatives of political parties had come to the meeting, which caused people to start leaving the hall.

The discussion resulted in a decision to abstain from adopting a declaration but to focus on two demands, including the prevention of the dissolution of Parliament in order to give MPs enough time to adopt changes to the Election Code, and the abolition of monopolies.

The protesters decided that the demands had to be concrete in order to be more easily accepted.

Prior to the round table discussion, university lecturers and members of the Bulgarian Academy of Sciences gathered to discuss solutions to the crisis.

On Friday, a meeting organized to establish a Public Council at the President's Office collapsed after representatives of the protesters and the trade unions walked out of the room, saying that they would not sit on the same table with members of the entities they were fighting against.

The meeting had brought together representatives of the protesters, the trade unions, the business sector, the academic community, and NGOs.

The plans for a nationwide protest on March 3, Bulgaria's national holiday, remain.

The protest is to be backed by a large number of Bulgarians living abroad, with gatherings scheduled to take place in 25 European cities.

A wave of protests erupted in Bulgaria over the high electricity and heating bills, which caused the center-right GERB government to resign on February 20, but the demonstrations did not cease and the demands of the participants now include a change of the existing model of government and elimination of monopolies.