Borisov Must Be Investigated for Acquiring Media, Ex PM Says 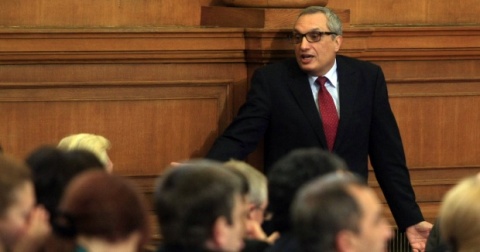 According to Kostov, the Prosecutor's Office needs to figure out whether Boyko Borisov acquired any newspapers or other media during his term in the past 3.5 years.

Kostov cited a publication of the Pik agency of a leaked tape of a conversation between two persons called "Ogi and Svetlana" who mention people with initials B.B., Tsv. Tsv. (Bulgaria's outgoing Interior Minister), Venelina (Venelina Gocheva – chief editor of the 24 Chasa daily), as well as Bulgarian banks, papers, and TV stations.

"I think this texts contains evidence about criminal violations and trading with influence, bribing media, etc," the ex PM said Saturday, as cited by the Presa daily.

"This must be investigated by the Prosecutor's Office. It mentions that Borisov and Tsvetanov bought two newspapers, and that the PM wants to take over the Poligraphic building in Sofia and to sell it. These are very serious accusations," Kostov deems.