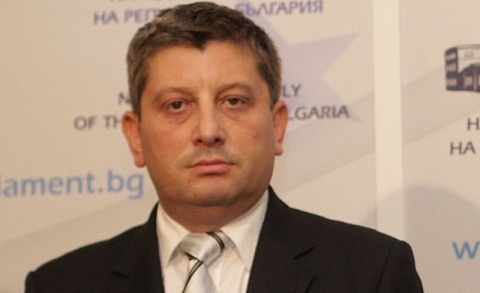 The GERB Chairman of the Parliamentary Economic Committee, Dian Chervenkondev, has conducted his own study which had shown the smoking ban is beginning to be strictly applied in Bulgaria. Photo by BGNES

Parliamentary debates on the full smoking ban imposed in Bulgaria on June 1, 2012, will continue in plenary hall.

Daritkova spoke in the aftermath of reports that disgruntled smokers are staging a new large-scale protest rally outside the building of the Parliament Friday afternoon.

She, however, stated she was counting on the MPs from the GERB majority to be responsible during the debates and to reinforce the ban.

The debates were imposed by amendments to the Healthcare Act, recently submitted by independent MPs, which were examined by the Health Committee at first reading and must now enter plenary hall.

Meanwhile, the Chairman of the Economic Committee, Dian Chervenkondev, also from GERB, stated his Committee would not discuss the issue. It already rejected proposals to lift the ban under amendments to the Tourism Act.

Chervenkondev says it does not make sense to reexamine legislation before there is enough information on its real effects.

He noted he had conducted his own study which had shown the ban is beginning to be strictly applied in the country.

Daritkova says the ban is beneficial for the future of the nation since stats show Bulgaria is first in Europe by cardiovascular disease, while smoking also places people in danger of getting cancer.

Health Minister, Desislava Atanasova, is one of the strongest proponents of the smoking ban, insisting since it has been passed as law, it must be followed strictly.

She says she is fully prepared to convince any MP, from any party, of its benefits.

Atanasova also sees the ban as "European behavior," and assesses its application as successful.

On recent news that the right-wing Union of Democratic Forces, UDF, is launching a petition for a referendum on the smoking ban, she said the referendum is senseless since the ban is already a law, and the BGN millions for it should rather be spent on healthcare.