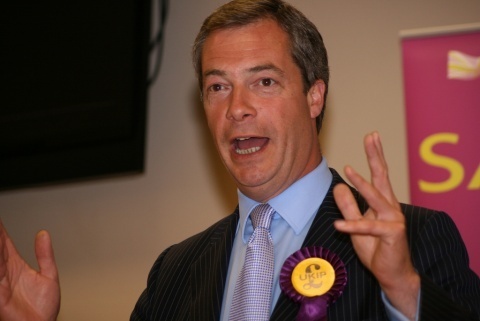 UKIP leader Nigel Farage has vowed to campaign very hard on the fact that on January 1, 2014 the United Kingdom will open the doors to 29 million migrants from "the very poor countries of Bulgaria and Romania". File photo

The UK Independence Party leader has renewed with a vengeance his criticism of Bulgaria in a bid to fuel fears over new immigrants, coming as of 2014.

"It is completely irresponsible, wrong and stupid to be opening up our doors next January to 29 million people from Romania and Bulgaria," Nigel Farage fumed on BBC's Question Time.

In his words nearly 50% of Bulgaria's population are living on or below a very low poverty line, the average monthly salary is EUR 200 a month, while the average pensioner gets EUR 100 a month.

"This country is in a terrible state – the judiciary is not independent, the mafia basically runs the economy."

Nigel Farage went as far as to say:

"If I were a Bulgarian, I would be packing my bags now, wanting to come to Britain".

Bulgarians and Romanians will gain the unrestricted right to live and work in the UK from December 2013, when temporary curbs imposed in 2005 to protect the British labor market expire.

The UK Independence Party leader urged that British people are given the opportunity to have their say on European Union membership in an in/out referendum "very quickly."

"We can not control immigration policy into this country and be a member of the EU," Farage said, cheered up by the applauses of the audience in the studio.

The British eurosceptic MP's statement on Bulgaria triggered heated debates in the country and Internet forums are overflowing with anger comments.

On Monday a young Bulgarian lady, who lived and studied in the UK and chose to go back to Bulgaria and build a career here instead of the UK, circulated to the media an Open Letter to Nigel Farage.

"Although I try and understand your immigration concerns, I must admit that I found your comments on Bulgaria untrue and somewhat insulting. In fact, they are only reaffirming my opinion of the wrongful idea that people in the UK and around the world have about countries in Eastern Europe," Ralitsa Behar wrote in the open letter.

After making her case in defence of Bulgaria and Bulgarian people, Ralitsa Behar extended an invitation to Nigel Farage to visit Bulgaria as a guest of her and her family.

"Thus we can explain to you and you can see for yourself how much the country has changed over the past 20 years; and for you to see the potential that we have to grow even more in the future," Behar said.