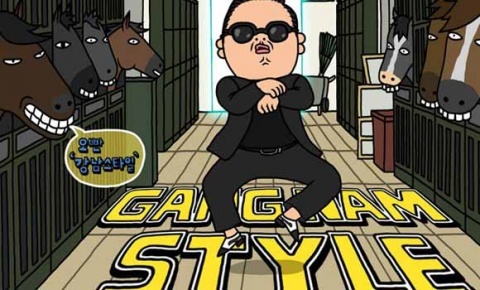 Celebrating the rapidly changing language, CollinsDictionary.com chose one word for each month of 2012 based on the top news stories and trends of the year, with events such as the Olympics, the Queen's Diamond Jubilee and the US election represented.

Collins' choices range from January's "broga" - a new form of yoga specifically for men, or "bros" - to December's "fiscal cliff". Gangnam style is picked for November.

"South Korean musician Psy's catchy song became the most viewed video on YouTube in November with close to a billion views," said Collins. "It has since spawned many spoofs in countries across the globe." The phrase will be added to the online dictionary in its next update.

In February, Angelina Jolie's pose at the Oscars "with her right leg jutting out of her high-slit dress" led to the adoption of a new word, "legbomb". The word makes Collins' top 12 list, but its inclusion in the online dictionary is under review, as editors study evidence of its continuing use.

Following choices of "Eurogeddon", "Zuckered" - used after the plummet in share price that followed Facebook's initial public offering, but rejected for inclusion in the dictionary - and "jubilympics", is November's pick of "Gangnam style".

The picks came from among almost 7,400 new word submissions from the general public, after Collins opened its online dictionary up to suggestions in recognition of "how language is constantly evolving through pop culture, events and trends". Not all will "have the longevity" to be included in the print dictionary, said the publisher, "but their submission to CollinsDictionary.com shows how the site has become a forum to discuss the new words we use to describe current events and trends".

Following is a list of CollinsDictionary.com words of the year: