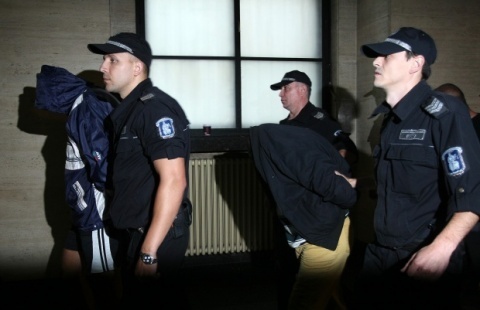 Illegally owned guns and munitions have been seized by the Bulgarian police from the home of the father of one of the defendants in the high-profile organized crime case codenamed "The Killers."

The information was reported Sunday by the Interior Ministry's press office.

The operation has been carried out jointly with the Sofia Regional Prosecutor's Office. Four addresses in the village of Mala Tsarkva, near the mountain town of Samokov, have been raided.

The illegal weapons have been found in properties owned by the father of defendant Raycho Stoynev AKA Hizharya (The Mountain Cabin Keeper).

Thus is the second time since a raid in 2010 when police finds illegal weapons in a home of Stoynev Sr.

In 2011, the 61-year-old man received a suspended sentence of 1 year and 4 months and 3-year probation for illegal guns ownership. He also has a DUI sentence.

His criminal record dates from the distant 1968 when he stole a cassette player from his high school. In 2007, Stoynev Sr. has been fined for obstructing justice after not letting a law enforcement officer inside his house.

According to the prosecution, the son, Raycho Stoynev, has hidden in the mountain cabin he managed two killers.

In November, Prosecutor, Asya Petrova, asked life with parole for Petar Atmadzhov, and 20 years behind bars for Stoynev.

The prosecution also asked life without parole for five defendants.

They are Petar Stoyanov the "Chieftain," Vasil Kostov, Yanko Popov, and Georgi Valev.

The operation was carried out by the police, DANS, and the Sofia City Prosecutor's Office in connection with the murder of the controversial Samokov football club president Yuriy Galev. The President of the Bulgarian Sumo Federation Petar Stoyanov aka the "Chieftain" was among those detained.

The trial continues at the Shumen Regional Court with two other prosecutors and about 20 defense lawyers making their pleas.