Bulgarian PM Admits He Was Sleepy at Nobel Prize Ceremony 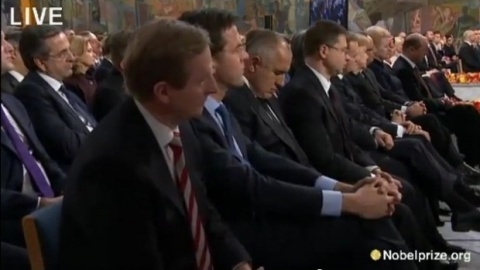 A TV grab shows Bulgarian Prime Minister Boyko Borisov texting during the 2012 Nobel Prize ceremony in Oslo, which is said to have shocked the Dutch PM, Mark Rutte, sitting next to him. Photo by BGNES

Bulgarian Prime Minister Boyko Borisov has admitted that he was quite tired during Monday's Nobel Peace Prize ceremony in Oslo.

Pictures have appeared in social media showing Borisov either dozing off or – more likely – being distracted by his cell phone during the ceremony.

"You have to have in mind that I work much and I get very tired," Borisov told reporters on Thursday upon asked to comment on the pictures.

He noted that jet lags have an adverse effect on one's biorhythm.

On Monday, Bulgarian media claimed that Borisov "shocked" his counterpart from the Netherlands, Mark Rutte, by sending SMS Text Messages during the 2012 Nobel Prize Ceremony.