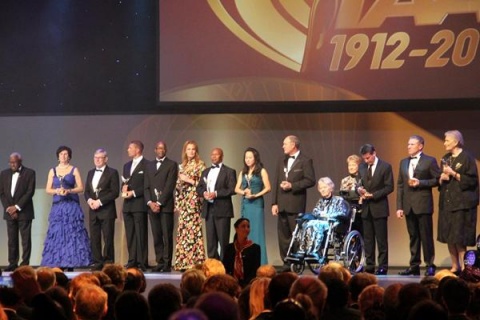 The IAAF Centenary Gala Show was held in Barcelona's Palau Nacional Saturday evening. Kostadinova is the tall blonde woman on the picture by IAAF.

The President of Bulgaria's Olympic Committee, BOK, track and field legend, Stefka Kostadinova, was inducted Saturday evening into the IAAF Hall of Fame.

The ceremony was held in Barcelona's Palau Nacional, home of the Museu Nacional d'Art de Catalunya, celebrating the Centenary of the International Association of Athletic Federations, IAAF.

The event was marked not only by the announcing of the best track and field athletes for 2012 (Usain Bolt and Allyson Felix), but with the establishment of the first ever in the history of the sport Hall of Fame.

The nominations have been subject to long and detailed discussions by a special panel, and 24 made the cut for having outstanding contributions for the advancement of the sport.

Kostadinova, a former high jump competitor, is the only Bulgarian among athlete stars such as Sergey Bubka, Carl Lewis, and Jesse Owens.

At the 1987 IAAF World Championships, in a thrilling competition with former World record holder Tamara Bykova, the Bulgarian negotiated 2.09m on her second attempt, which remains the World record to this day.

The one and half hour show took place on a giant stage backed by a video wall, in front of an audience of around 800 guests, which included IAF Honorary President HSH Prince Albert II of Monaco, IOC members, members of the World Athletics Family and representatives of other International Federations as well as dignitaries from Spanish sport and politics. Joining them were around 200 champions from the London Olympic Games 2012 (and 1948!) as well as many other legends of the sport, who were treated to an array of music and dance performances and inspirational videos commemorating 100 years of the IAAF.

The Hall of Fame is on display at the Museu Ol?mpic i de l'Esport Joan Antoni Samaranch in Barcelona.