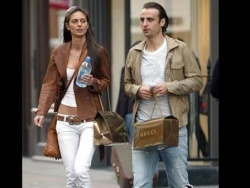 Fulham striker Dimitar Berbatov, who became a father for the second time to a baby girl earlier this week, has named his daughter Elia, according to a Bulgarian media report.

Thus the baby girl and the mother, Elena, will share similar names.

Fulham forward's relatives in the city of Blagoevgrad expected the child to be named after Berbatov's mother, Margarita, but the couple has obviously decided otherwise.

Elia was born on November 19 in Sofia. The baby and the mother are feeling fine and are about to be released from the hospital and spend a few days at their home here, before Berbatov takes his enlarged family to England.