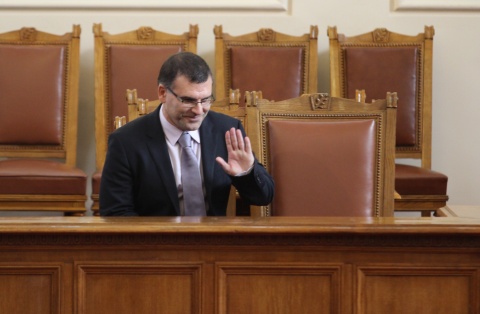 Finance Minister Simeon Djankov has suggested that Bulgaria will strive to achieve average European income levels in the next 5-10 years. Photo by BGNES

Finance Minister Simeon Djankov has defined low incomes as the main challenge before Bulgaria, followed by the demographic problem caused by immigration and low birth rates, and the low energy efficiency of the economy.

"In the long term, Bulgaria will strive to achieve average European income levels in the next 5-10 years. The crisis in Europe has had a sobering effect recently. Only in the past quarter, the Greek economy shrank by over 7%, meaning that in 3 or 4 years the average Bulgarian will be richer than the average Greek," Djankov suggested at a forum during which the World Bank presented its estimate of the opportunity for golden growth for Bulgaria.

He pointed out that the income issue was a problem against the backdrop of tremendously inflated expectations of Bulgarians after the country's accession to the EU in 2007.

"In Bulgaria, these tremendous expectations for a better life have triggered greater populism in politics than in other European countries," Djankov declared.

He reasoned that it was good for Bulgarians to compare themselves with the best but added that the population had to increase their labor productivity.

According to forecasts of World Bank experts, Bulgaria's working age population will shrink by 45% by 2050, meaning that the number of elderly people relying on a decreasing number of working-age people will spike dramatically.

On Wednesday evening, Finance Minister Simeon Djankov suggested that the demographic issue would be included in the World Bank's criticism of Bulgaria, according to reports of private TV station bTV.

On Thursday, Djankov argued that births were less than deaths all over Europe.

"To me, the fight against our bad demographics is a fight for jobs," Djankov added.

Bulgaria's Finance Minister recommended introducing incentives for an increasing number of elderly people who wished to work after meeting retirement eligibility criteria, adding that this would help Bulgaria deal with the demographic problem.