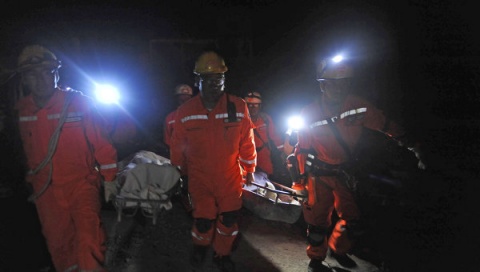 Rescuers carry the bodies of the victims of the earthquake on November 7, 2012 in San Marcos, Guatemala. Photo by RIA Novosti

The powerful 7.4-magnitude earthquake that struck off the coast of Guatemala on Wednesday has killed at least 48 people, the country's President has said.

President Otto Perez Molina told reporters during his visit to the disaster area in the San Marcos state on the border with Mexico that the tremor also destroyed over 50 homes and injured more than 150 people.

On Wednesday, the US Geological Survey (USGS) said the quake struck at 1635 GMT some 24 km southwest of Champerico, Guatemala, and 163 km west-southwest of Guatemala City.

The earthquake damaged roads and several power lines, cutting transportation links to the region and leaving some 73,000 homes without electricity.

The quake was strongly felt in Guatemala City and Chiapas, and prompted evacuations as far north as Mexico City. It was also felt in El Salvador, Nicaragua and Belize.