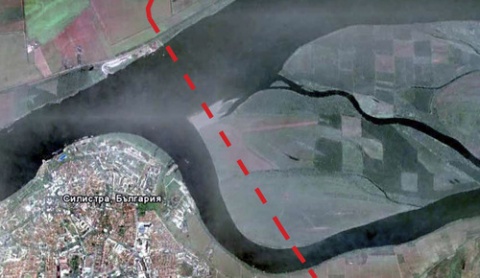 The likely position of the future Bulgaria-Romania Danube Bridge 3 at Silistra-Calaras. Map from stroitelstvo.info

A Spanish-Chinese consortium called SPHIMX has expressed interest in building a third Danube bridge linking Bulgaria and Romania, according to the Mayor of the Bulgarian Danube city of Silistra Yulian Naydenov.

The news comes after on Tuesday Bulgarian PM Borisov and EU Regional Development Commissioner Johannes Hahn took a walk on the so called Danube Bridge 2, linking Bulgaria's Vidin and Romania's Calafat, that is to be opened in 2013, after decades of delay.

The Bulgarian government has made clear its intention to built at least two more bridges on the Danube together with Romania, in addition to the new Vidin bridge, and the one linking Bulgaria's Ruse and Romania's Giurgiu.

Silistra Mayor Naydenov further revealed that some time ago he had talks with Jesus Ferrer, who is the President of the SPHIMX consortium.

According to Naydenov, the Romanian officials who took part in an international conference dedicated to trans-border cooperation in the Danube Region in Bucharest on October 22, 2012, reacted positively to the idea for a bridge at Silistra-Calaras.

"[The SPHIMX consortium] is one of the firms that is undertaking a multi-million investment in Plovdiv. We are going to await the decision of the Cabinet, and the Prime Minister in order to decide on the following steps. In Bucharest, I met with the state secretary and transport minister of Romania; they are ready to react if an investor emerges," explained the Mayor of Silistra.

When finally completed, Danube Bridge 2 at Vidin-Calafat will be third ever bridge in the Bulgarian-Romanian section of the Danube in the past 2000 years.