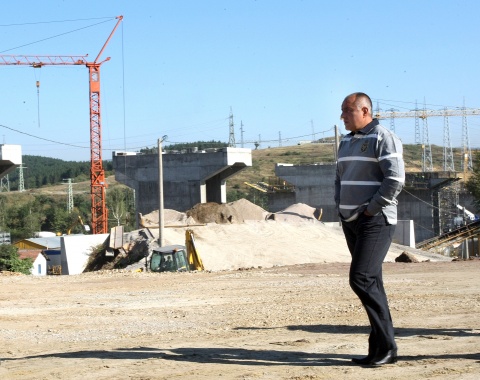 Bulgarian PM Borisov wants to remain in history as the ruler who built the country's infrastructure. Photo by BNGES

Bulgarian Prime Minister, Boyko Borisov, declared Saturday his Cabinet is going to slate an additional BGN 18 M in 2013 for the culture sector.

Borisov spoke during his visit to the Danube city of Ruse, where he examined renovations at the Philharmonic Hall and the restoration of the antique Roman fortress Sexaginta Prista. He praised both works.

"Magnificent renovation of the Ruse Philharmonic Hall, exceptional archaeology, we gave millions for both," said he.

In the company of Regional Minister, Lilyana Pavlova, and Minister of Sports, Svilen Neykov, Borisov cut the ribbon of the repaired and modernized track of the Ruse stadium.

"We made a track allowing hundreds of children to train and practice. Such facility! Our track and field legend, Hristo Markov, would cry when seeing it," Borisov declared.

From Ruse, the PM traveled to the northeastern city of Shumen to inspect construction works on the Hemus highway between Shumen and Belokopitovo.

Just days ago, Bulgaria's Culture Minister, Vezhdi Rashidov, complained the funding for his sector in the 2013 State budget is far from sufficient and blamed Finance Minister, Simeon Djankov, for failing to understand the importance of culture.