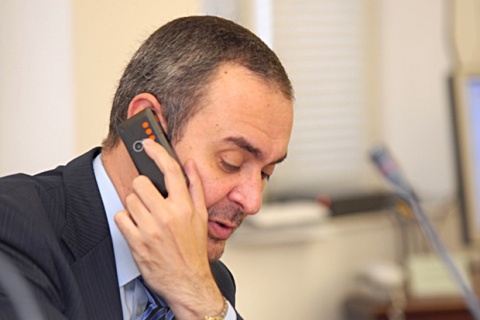 Bulgaria's Chief Prosecutor, Boris Velchev, is near the end of his term and will be replaced by the new VSS. Photo by BGNES

The 288 delegate-prosecutors will choose between 13 candidates, 11 of whom hold senior posts within the country's prosecutor's offices. The maximum number of nominations was 54.

According to the rule, the candidate must secure 50% of all votes plus one. In case of runoff, those who collect more votes will be elected.

The Bulgarian online news agency Dnevnik writes that magistrates have spoken off-the-record, saying the vote has been agreed on under the table a while ago and the prosecutors who have shown strong principles in their positions have been prevented from making the final cut.

According to Dnevnik, three out of the four to be elected are already known and will certainly make the next VSS. The article lists them as Deputy Chief Prosecutors, Kamen Sitnilski and Mihail Kozharev, and Plovdiv Appellate Prosecutor, Rumen Boev, all three, allegedly, close to the executive power.

Chief Prosecutor, Boris Velchev, called on all delegates to make a swift decision and for the new VSS to start ASAP the procedure to elect his replacement over the tight deadline. He stressed the new VSS members from the prosecutors' quota will have the difficult and crucial task to nominate the country's next Chief Prosecutor.

The meeting started at 9 am Friday, but is expected to end late at night over the lengthy ballot counting.

On Sunday, six members of VSS, from the judiciary quota were elected after twenty four hours of voting while the investigators designated their VSS member Wednesday.

11 VSS members come from the parliamentary quota while the other 11 are from the professional one – 6 judges, 4 prosecutors and 1 investigator.

The Members of the Parliament will elect their representatives on September 26.

The new VSS will be key for Bulgaria since it will elect the new chief prosecutor, and the president of the Supreme Court of Cassations.

The crucial election of the new VSS comes in the aftermath of several large-scale scandals in which the current one was entangled and the latest EC report on Bulgaria's five-year progress under the Cooperation and Verification Mechanism (CVM), highlighting the misguided policies of VSS, the inconsistent application of the principle of independence of the judiciary and the implementation of reforms under external pressure.