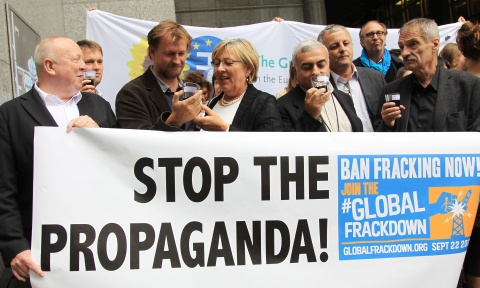 Members of the Green EP group and NGO representatives take part in public action in front of the European Parliament in Brussels, Tuesday, as part of a campaign against shale gas. EPA/BGNES

This comes after EP's Industry Committee passed a much more liberal decision Tuesday, saying no environmental regulation amendments are needed to allow fracking.

The European Parliament is under way to come out with a full-fledged position on shale gas exploration and drilling, after the European Commission came out with a thorough report on the approach.

Revealed in early September, the EC report urges tight regulation of fracking due to many environmental hazards, in particular for ground water.

Among the proposals voted Wednesday by the EP's Enviroment Committe are a ban to EU funding for the shale gas industry and related research, mandatory environmental impact assesments for fracking projects, classification of fracking fluids as hazardous waste, and a ban on fracking in areas supplying drinking water.

"Our committee showed today that the concern for public health and the environment must stay over and above all industrial and financial interests," stated Bulgarian liberal MEP Antoniya Parvanova.

She added that strict regulation, including stringent environmental impact assesment criteria, is needed at the EU level to safeguard the public's interests.