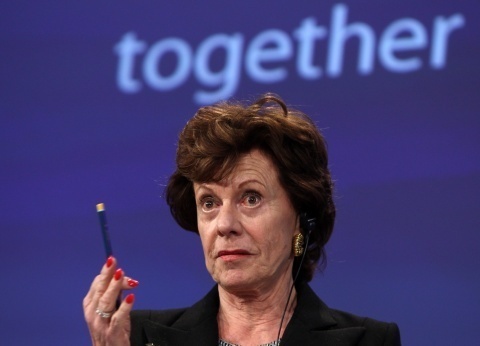 Neelie Kroes, European Commission Vice President in charge of the Digital Agenda has voiced concerns as the pressure on Bulgarian media continues, both political and economic, leading to journalism's self-censorship. Photo by EPA/BGNES

The Vice President of the European Commission and EU Commissioner for Digital Agenda, Neelie Kroes, has confirmed Tuesday her upcoming visit in Bulgaria.

Asked by the Focus news agency about the goal of her visit, Kroes has said that half of all Bulgarians have never used the internet and such data is particularly alarming because it shows that part of Bulgarian society is in a disadvantaged position.

The Commissioner further pointed out she wished to inform as many people as possible that the internet is for everyone and investments in the digital sector are the best way to promote new business opportunities, new job openings, and economic growth. She added she would like to also assist in her work Bulgaria's former EU Affairs Minister, Gergana Passy, whom she called "the current digital champion."

She will also participate in a demonstration of the Call Services used for emergency assistance in traffic accidents; will hold a working lunch with a group of "digital champions," and will meet with Bulgarian journalists and publishers to discuss freedom of press and other issues.

The visit comes at a time when freedom of media in Bulgaria has been a serious source of concern with a raining near full monopoly on the media market.

However, Bulgarian journalists are alarmed that the agenda of her visit to Bulgaria at the end of September includes only meetings with the "biggest players" such as politicians, institutions, and publisher unions, but not with journalists who have been pressured, terrorized and issued death threats by pro-government groups, the site for investigative journalism Bivol wrote recently, citing its own, unnamed sources in Brussels.

The agenda, being coordinated with the Bulgarian government, fully excludes any independent journalists, bloggers and NGO representatives, who are the people that can depict an objective picture of the real state of freedom of speech in Bulgaria, the article concluded.

Also recently, group of Bulgarian journalists, largely considered to be dissident, sent an open letter to the Commissioner to ask her to consider meeting with them.