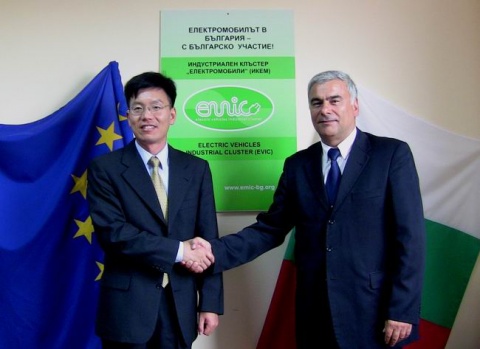 Yongping Chen, the Europe Manager of the Chinese company BYD (l) was Bulgaria to discuss potential use of electric vehicles. Photo by IKEM

Yongping Chen, the Europe Manager of the Chinese company Build Your Dreams (BYD) has visited Bulgaria on the invitation of the Electric Vehicles Industrial Cluster (IKEM) to discuss potential use of such vehicles in the country.

Chen held working meetings on the issue with members of the IKEM Managing Board, IKEM informs.

IKEM representatives and the Chinese guest have also visited the municipality of Bozhurishte near Sofia on the invitation of its Mayor, who had outlined plans for the construction of a technology park there. The Mayor also presented achievements in improving local infrastructure and declared readiness for partnership with BYD.

There has been a meeting with Slav Monov, CEO of the municipal Capital Auto Transportation company of Sofia. The talks have focused on information about the capacity of the city's public transportation and opportunities to decrease cost by the use of electric buses. The information will become the basis of a business model for a test run of such buses.

Preliminary data shows that savings from the use of these buses could pay off one electric bus in 4-5 years. A BYD bus can run for 10 years on the same batteries, meaning it could be used for over 5 years without paying for fuel, in addition to preserving the environment.

BYD is based in China and has exclusive rights on the import of Nokia, Motorola, and Samsung, all while it holds half of the global market of cell phone batteries, and manufactures electric vehicles and buses. Mogul Warren Buffet has investments and shares in BYD.

Current interests of the company include European markets such as the UK, the Netherlands, Hungary, and Switzerland among others.