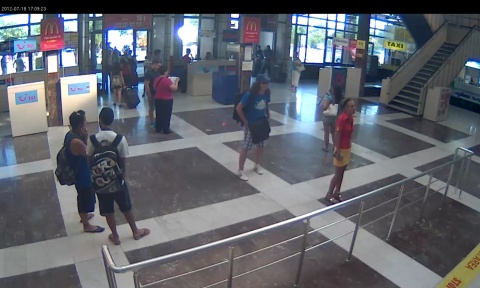 A CCTV photo released by the Bulgarian Interior Ministry shows the suspected suicide bomber who committed the terrorist attack in Burgas (middle, in blue T-shirt and baseball cap). Photo by Interior Ministry

The suicide bomber who committed the July 18 terrorist attack in Bulgaria's Burgas killing 5 Israelis and 1 Bulgarian in a bus bombing has picked his target spontaneously, according to a Russian analyst.

According to U.B. Shteglovin, an Arab Studies specialist from the Russian Institute of the Middle East, the suicide bomber, whose identity remains unknown, had not originally intended to blow himself up in a bus with Israeli tourists at the Sarafovo Airport near Burgas but chose the bus as his target only when he was on the spot.

"The suicide bomber selected his target spontaneously," Shtegovin writes in an article published by the Russian Institute of the Middle East.

The analyst argues that the CCTV camera footage indicates that the potential terrorist entered and exited the waiting room for the inbound flight from Israel several times which means that he was seeking the best spot for carrying out a terrorist attack.

According to the Russian analyst, a person with the experience of the mentioned ex Guantanamo detainee would be very easy to identify, which grants credibility to the statements of Bulgaria and Sweden.

Shtegovin believes that the claims of Israeli Prime Minister Benjamin Netanyahu that the pro-Iranian group Hezbollah is behind the Burgas bus bombing can hardly be true.

The Russian analyst argues that at the present moment neither Hezbollah, nor Iran have any interest in committing a terrorist attack of the scale of the Burgas incident. He cites data of the Russian think tank claiming that Iran's primary investments at present are directed at targeting the Sunni Arab monarchies in the Persian Gulf such as Saudi Arabia and Bahrain, rather than targeting Israel, and that Hezbollah is actually preparing for a civil conflict in Lebanon once the regime of President Bashar al-Assad collapses in Syria.

Given this background, the Russian analyst concludes that, keeping in mind the fake US ID of the suicide bomber, that he arrived in Bulgaria from abroad, most likely from Albania or Bosnia "where the radicals enjoy very strong positions".

Shtegovin believes that the Burgas bus bombing was prepared by several people given the background of similar attacks, with it being likely that the bomb was detonated by an accomplice from a distance, and that a third person might have also been present to film the attack in order to post footage online.

The Russian analyst further notes that there are discrepancies in the conclusions of Bulgarian Interior Minister Tsvetan Tsvetanov about the suicide bomber because of the fact that in the Burgas bus bombing the body of the suicide bomber was not blown to piece but was largely preserved.

Shtegovin believes it is unlikely that somebody would be allowed to place unidentified baggage in the baggage compartment of a tourist bus.

"We can make the conclusion that we are dealing with an unknown group, Base of Jihad, as has been announced by online media. In other words, it is possible that a person or a group of people who have seen online footage showing the fight against infidels might have decided to "make their contribution" on the eve of the Muslim holy month of Ramadan.

"In our view, the terrorist attack against the Israel tourists in Bulgaria is more likely to be a part of radical Sunni jihadism than of a Shia attack," the Russian analyst concludes.