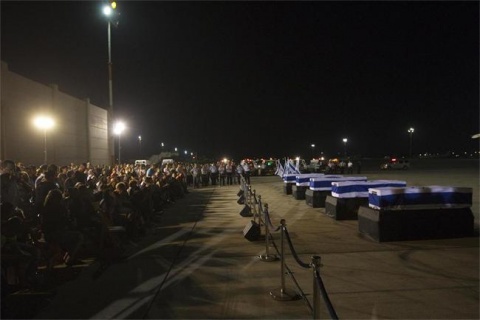 The coffins of the victims of the suicide bombing in Bulgaria arrived at the Ben-Gurion Airport early Friday morning.

Thousands attended on Friday the funerals of the victims of Wednesday's terror strike in Bulgaria's Burgas, Israeli media reported.

Itzik Idan Kolengi and Amir Menashe, two of the five victims of Wednesday's Burgas suicide bombing were laid to rest Friday morning at Petah Tikva's Segula Cemetery, according to the Times of Israel.

At noon, thousands reportedly gathered at the Nahalat Asher Cemetery near Acre to bid a final farewell to Maor Harush, 24. His friend Elior Priess will be buried Friday afternoon in the same cemetery.

Kochava Shriki, 42, was buried in the Rishon Lezion Cemetery by scores of family, friends and neighbors.

Kolengi and Menashe, both 28-years-old, were childhood friends and traveled to Bulgaria with their wives earlier this week. Both men were killed and their wives were both injured in the attack. Natalie Menashe was lightly injured in the blast.

The Kolengis had celebrated the birth of their first child four months ago and planned a long weekend away without their daughter, who was left in the care of her grandparents.

David Kolengi, Itzik's brother, eulogized him saying, "I will never forget you. I promise you that the family and I will take care of your wife, Gilat, and your daughter, Noya, who resembles you."

Natalie Menashe mourned her husband saying, "I have no one now. We talked about our plans for the future and suddenly we were blown up. I saw him burned before my eyes. Next month was supposed to be his birthday. I don't want to live anymore."

Kochava Shriki had told her sister moments before her death that she was pregnant. "I don't believe the magnitude of the disaster that befell us, specifically now that she became pregnant after so many attempts," a relative of Kochava's said.

Shriki's husband, Yitzhak, searched for her for hours after the explosion at the Burgas airport separated them.

"We got on the bus and sat in the fourth row," he recounted to Ynet. "Suddenly I felt a strong explosion from my left. I fell on the floor and I was hazy for 20 seconds, I succeeded to get up a bit, but I was still dazed and dizzy. I moved towards the exit and shouted to my wife 'come with me towards the exit.' A few seconds later I saw she wasn't with me."