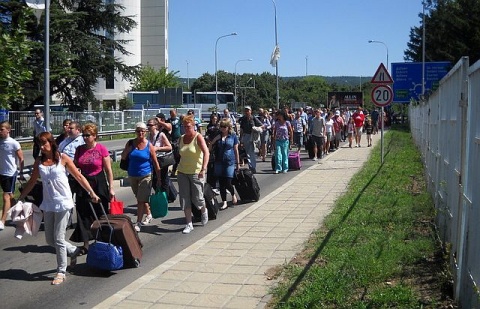 A suspicious suitcase escalated tension at the Varna Airport after July 18's terror attack against Israeli tourists at the Burgas Airport. Photo by dariknews.bg

A suspicious piece of luggage resulted in temporary restrictions for passengers and vehicles on the territory of the Varna Airport amid heightened security measures due to the July 18 terror attack in the Black Sea city of Burgas.

The suspicious suitcase was on a bus with a Burgas registration plate carrying Jewish tourists from the Sunny Beach resort.

The bus activated the police detectors at the control point in front of the Varna Airport and the passengers were told to get off.

Police sealed off a 10-km area in the radius of the site.

The panic lasted for about 20 minutes and at 11 a.m. the bus was allowed to continue because the check had detected no irregularities.

There is increased police presence at the airport in the Black Sea city of Varna.

There are police officers every 20 meters and the incoming vehicles are thoroughly inspected.

Tour operators are reportedly keeping foreign tourists on holiday in Bulgaria unaware about the terror attack to prevent panic.

All flights from the Burgas Airport are being transferred to the Varna Airport.

The Varna Airport is expected to service over 70 flights on Thursday.

A bus carrying Israeli tourists exploded Wednesday afternoon at the airport of the Bulgarian resort city, killing at least seven people and wounding more than 32.

Five people died at the site of the explosion and 32 were admitted to hospital, two of which died overnight.