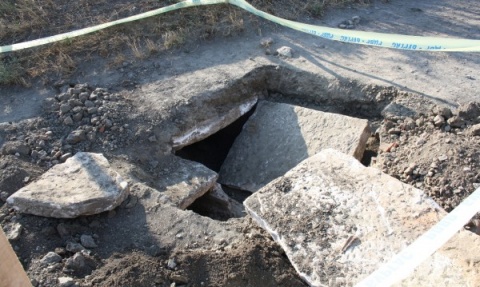 A truck carrying concrete for a construction site near Bulgaria's Debelt has caused the precious discovery of two tombs dating from Roman times.

The news was announced Saturday by the Director of the National History Museum at the Bulgarian Academy of Sciences, BAS, Lyudmil Vagalinski.

The truck was on a dirt road near the main one between the Black Sea city of Burgas and Sredets, carrying concrete for the construction of a house. The road caved in under its weight and uncovered the marble plates of a Roman tomb, most likely dating from the 2nd-3rd century A.C.. Another tomb was discovered nearby in the aftermath.

The truck, however, cracked some of the marble, while treasure hunters, conducting their own research, have added to the problems archaeologists now face.

The area is currently sealed in expectation of a permit to start archeological digs. The authorities are also conducting a probe in the case.

"Debelt is one of the key archaeological sites in Bulgaria. This is a Roman city, a colony of the highest level, meaning it is a direct copy of the organization and planning of Ancient Rome. It has been founded in year 70 A.C. by retired Roman legionnaires," Vagalinski explains.