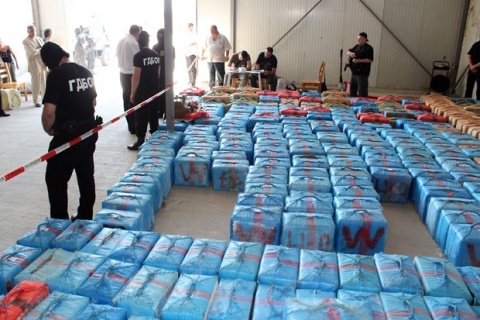 Twelve metric tons of hashish have been discovered in a tool warehouse in the village of Mirovyane, near the capital Sofia in Bulgaria, destined for distribution in the EU. Photo by Darik News

Bulgarian police have busted a huge amount of illegal drugs destined for distribution across the European Union.

The news was announced Thursday by Prime Minister, Boyko Borisov, his Deputy Interior Minister, Tsvetan Tsvetanov, and the Director of the Main Unit for Combatting Organized Crime, GDBOP, Staminir Florov.

The announcement came on the exact same day when Borisov's ruling, center-right Citizens for European Development of Bulgaria party GERB marked the third anniversary of taking office and the Interior Ministry celebrates their professional day.

Twelve metric tons of hashish have been discovered in a tool warehouse in the village of Mirovyane, near the capital Sofia, and have reached Bulgaria by sea from Morocco.

According to Borisov and Tsvetanov, this is a huge success for Bulgarian authorities and proof the country is fulfilling its commitments as a future member of the Schengen Area.

Florov, showing the impeccably wrapped packages with hashish, explained that the price of the busted load exceeds EUR 360 M.

The investigators see a link with another shipment of illegal drugs caught 3 days ago in the Danube city of Vidin, which weighted over 4 metric tons. The authorities said then that this is the largest amount seized in Bulgaria in the last 15 years.

Florov bragged Thursday that the latest bust shows how solid Bulgarian borders are in preventing the smuggling of huge amounts of illegal drugs in the EU. He said the warehouse has been rented by the same suspects as in the case in Vidin and another one in Greece in 2006. The GDBOP Chief, however, declined disclosing their names on grounds "they watch TV too and can hide."

The hashish has been unloaded in Black Sea waters and taken to the mainland by fishermen, Borisov explained.

The Bulgarian authorities have already notified Europol about the bust.

Tsvetanov also stated that the latest discoveries of huge amounts of illegal drugs are proof that Bulgaria is committed to fulfill all Schengen criteria and will become a full-pledged member of the free zone.