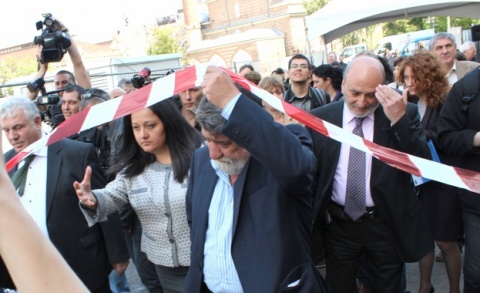 Regional Minister, Lilyana Pavlova (l), and Culture Minister, Vezhdi Rashidov (r) at the ceremony for the transfer of archaeological discoveries from the Struma highway to local museums. Photo by BGNES

Bulgarian archaeologists have adhered to the June 30 deadline issued by Prime Minister, Boyko Borisov, to finish excavations so that construction on the southwestern Struma highway can go on.

After working round-the-clock, they freed the terrain and workers who will build Lot 1 of the highway can now enter with excavators, loaders, and other heavy construction machinery.

Borisov was scheduled to attend in person the transfer of the archaeological discoveries to the museums in the nearby town of Dupnitsa and city of Kyustendil, but other urgent commitments have prevented him from travelling to the location. The cabinet was represented by Regional Minister, Lilyana Pavlova, Transport Minister, Ivaylo Moskovski, and Culture Minister, Vezhdi Rashidov, who became the very first people to see the Roman coins and ceramics, dated from the 4th century AC.

Pavlova praised highly the team of archeologists, led by Rumen Spasov, thanked them for adhering to the dateline, and called them "awesome professionals."

She explained that currently there is a public tender for Lot 2 of the highway from Dupnitsa to the city of Blagoevgrad with construction works scheduled to begin by the end of 2012. Archeologists will be allowed to enter the site as early as August to make their research.

Spasov's team is relocating to the Maritsa highway to continue their work. According to the Regional Minister, preserving precious finds is as important as keeping up with schedules and deadlines.

In addition to the silver and bronze coins and ceramics, the archaeologists have found at two sites the foundations of several buildings, part of a complex, and several tombs with cremations from antique times. The finds will be displayed not only at the museums of Dupnitsa and Kyustendil, but also at the Regional Ministry, while there will be an exit from the highway, leading to their initial location.

At the beginning of January, during an inspection of the Struma highway, the PM shocked many, when he treated local archaeologists in a surprisingly offensive fashion with respect to an archaeological site found during the construction. He later retracted his statements and said that archeological excavations on the routes of all highways that are currently being built in Bulgaria are on time and on schedule and would not hurdle construction works.

On March 19, the Greek company Aktor and the Bulgarian Road Infrastructure Agency signed the contract for the construction of Lot 4 of the Struma Highway leading from Sofia to the Bulgaria-Greece border.

The construction of the road section will cost BGN 59 M, and is supposed to be completed in 23 months.

Its launch was delayed by seven months because another bidder in the public procurement tender, "Trace Group Hold," appealed the selection of Aktor.

The construction works will require moving the tracks of the Sofia-Kulata railway line as well as building special facilities to protect a number of endangered animal species, including tortoises. The highway will have 5 overpasses, three underpasses, 2 railroad underpasses, and 7 bridges.